The inaugural PUBG_NT tournament kicked off with a bang, with 15 teams of two, preparing to fight for the biggest prize of all - honour and bragging rights - over a best of three series in a ruleset which prioritised kills and placement in the matches equally.

It seemed in the first match however, caution was the predominant strategy, with the very noticeable exception of Team America’s Kaisuko and Nasty Boyz’s Ushy, who managed to pick up over half of all the matches kills between them with a combined 12 kills out of the 23 non-playzone deaths. The match ended on the hillside just north of Georgopol, with several teams being pushed over the ridge by the circle into the sights of those who’d managed to perch themselves just below it, leading to a brutal series of firefights as teams scrambled for position in the final showdown, with players and teams falling one after the other. Eventually it would come down to Team America and Nasty Boyz, both fighting with no cover in the middle of the flat section of the area, and the blue zone following behind them. With a few well placed M416 shots, Kaisuko clinched the match for his team, giving Team America a huge amount of points to work with for the rest of the series.

The aggression that had worked so well for Kaisuko in the first game didn’t pay off in the second round however, managing to be the second person eliminated after making a risky move which cut him off from his partner, Bronopoly and letting Sazme of team Jagr Bombs knock him out. Only a few minutes later, Sazme managed to close in on Bronopoly and kill him too, knocking out Team America in 14th place! The carnage only continued as the first circle spawned in the very top right of the map, forcing almost every team to make a mad dash for Stalber with minimal loot. In fact, the circle was the MVP of this map, with 9 players being claimed by it (along with a further 1 dying via falling). The final shootout came down to Buble Butter facing off against Is This a CSGO Tournament?, with the both of them facing off over the side of a road, trying to use the terrain to their advantage as they fired shot after shot up and down. After some decisive vision plays, using a combination of smokes and stuns, Buble Butter managed to force CSGO out of position and take round 2, putting them within striking distance of the rest of the teams.

The third, deciding round of the tournament was launched, and much to the surprise of the players, they found their vision significantly impaired by a thick layer of fog. And, there was still everything to play for for almost every team, with even the lowest placed team at the time (Amamake Police) having the possibility of winning the tournament if they went on a monster killing run. Still, the main competitors were clear, with Nasty Boyz holding a 7 point lead over the rest of the competition, whilst 4 other teams (Jagr Bombs, Team America, Svinpælses & Buble Butter) sat menacingly in the 27-25 point range, needing only to come a few spots ahead of Nasty Boyz to secure a strong finish - and potentially win the tournament.

The circle seemed to have sated its bloodlust from previous rounds, centring around School and Apartments as the match went on, giving teams plenty of time to gather everything they needed, although not without incident as many teams who needed a significant points gain in this game went for a blisteringly aggressive gameplan, starting fights all over the map as they tried to catch people moving. This aggression was only helped by the relatively large amount of silencers that teams had managed to pick up, leaving many teams free to take potshots at anything that poked out of the fog with relatively little risk.

The final showdown was a tense staredown between Amamake Police’s Havoc Hero & Nasty Boyz’s ushy, the both of them armed to the teeth with Grozas from crates, which has the damage pattern of an AKM and the RoF of an SMG. They’d both heard each other fire, but weren’t willing to risk standing up from the grass to fire, crawling around and scanning the horizon for any movement, until finally HavocHero moved into ushy’s line of sight, letting him rattle off a quick few rounds and secure his team the chicken dinner.

With that win under their belt, alongside a second place and a respectable game 2 placing, Nasty Boyz secured the points they needed to put themselves atop the pile, with an 8 point lead above the second placing Team America, who had a similarly dominating lead of 7 points over the bronze medal team winning Svinpælses - who tied with points with RohzOP, but lost on the tiebreaker of ‘most kills’.

Still, one of the most fascinating parts of the event for me was the chance to get some stats on a competitive match of PubG, averaged over 3 games. As you can see from the chart, the kill tables were dominated by 2 players, ushy and Kaisuko, with a staggering 23 combined kills over 3 matches, which is as much as the next 9 players combined. 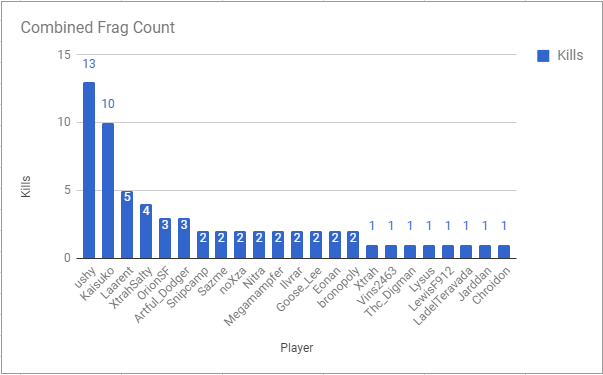 Of equal note are the 7 players who didn’t score a single kill in the entire tournament, the names of whom I won’t reveal or dwell on in order to hide their shame.

Another interesting stat is that the most effective weapon in terms of frags is the AKM, which is something we didn’t expect - even on the analysis desk - given our own experiences in the game. The AKM is a great weapon, and the ability to 1-tap enemies without a helmet is a great asset, however it suffers from the slow bullet velocity and atrocious accuracy that’s inherent to the 7.62 cartridge. Most players and analysts expected the M16 or M416 to top this, however it seemed that a smaller headcount made the long range picks that the 5.56 rifles are so adept at less important than the raw Time-To-Kill that the AKM gives in the latter stages of the game. 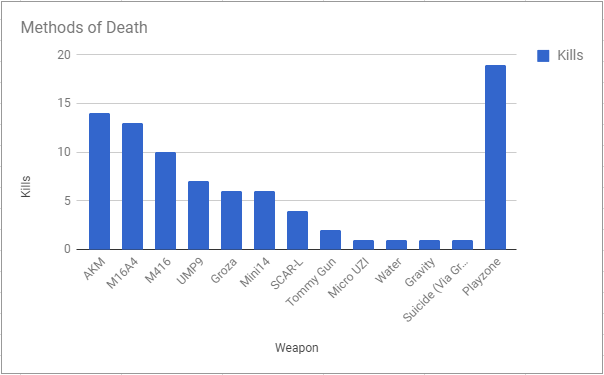 It will be interesting to see if this continues to be the case as the tournament grows, or whether the more traditionally popular 5.56 rifles claw back usage rankings. Also, as one can see, the Playzone is still as deadly in PUBG_NT as it is in solo’s, especially in Game 2. Hopefully as players refine their strategic mobility and practice their timings with regards to the circle, we’ll see deaths to the Playzone get lower.

It seems that this close range combat also hit most players abilities to line up clean headshots, with a relatively low headshot kill%, although given the time to loot in such a low density game, it’s likely that most players were able to find L2 Helmets, which require a follow up shot to kill with most guns, with the main exception of the Kar98. 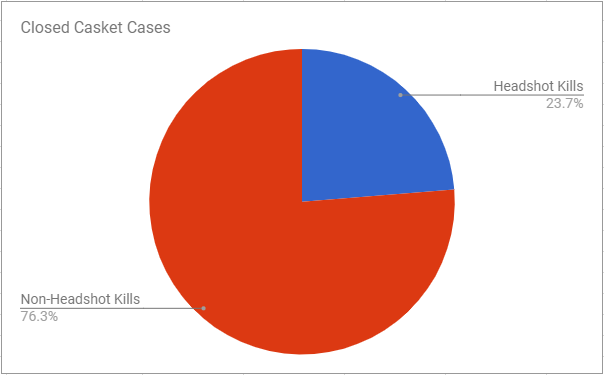 Something that was especially surprising was that ushy and Kaisuko, despite being the top fraggers, didn’t seem to achieve a particularly high headshot rating either, with Kaisuko having a 33% headshot ratio, and ushy only having a 7.6% ratio. I had expected to see a significantly boosted average from these two players, given their obvious firepower in the server, however it seemed that they preferred to go for safe and effective body shots with second and third follow up shots over the more flashy double headshot frags. Perhaps that decision is why they were able to pick up so many kills, and is something I suggest you try out to see if it works with your PUBG playstyle.

In a post-tournament interview, Nasty Boyz declared their intent to defend the title of best duo against any and all challengers come next PUBG_NT, and I personally look forwards to seeing them going up against obvious rivals in Team America alongside what other new challenges arrive in the sequel. So, stay tuned to Plus10Gaming for your chance to sign up and play in the next tournament!