Modern science can use cutting edge computers and technology with which to interpret unimaginable amounts of data across all fields. However, despite computers having simply mind blowing calculating abilities, there are certain limitations a computer cannot overcome. In these instances a human eye and brain is needed to analyse the information. Unfortunately, with the vast amount of data and information that can be collected there simply just isn't enough manpower and funding available to the scientific community to process it all. Crowd science was born from this need.
Enter Swiss company Massively Multi-player Online Science (MMOS) which aims to leverage the countless hours gamers have playing computer games. By integrating the tools required to conduct the research within a game and making it an incentivized part of the game. So Project Discovery was born. In partnership with CCP, MMOS has brought in this minigame to help identify which proteins show up where in the human body and in various different types of tissues for the Subcellular Protein Atlas. The scientific applications are both very complex and very diverse which will ultimately assist in helping cure all kinds of illnesses. More information on this project below.

And so March 11th 2016 we saw the launch of Project Discovery in EVE Online and the floodgates opened giving the denizens of New Eden the chance to take part in a landmark crowd sourcing exercise. Attila Szantner, co-founder of MMOS writes in his blog post:

This is the first time ever that a serious game is incorporated in a major videogame. It is definitely gaming history, but also citizen science history. And we hope that there will be many new implementations in many other videogames. We hope that we can show the industry that this is something worth the effort and energy. As Andie Nordgren, executive producer of EVE Online put it: ?We hope our example sets the stage for many other successful collaborations between science and gaming to come.? We couldn't agree more. So don't hesitate to contact us and integrate MMOS API with your games if you want to participate in real life science.

But within 3 hours of the feature going live it was pulled down again for a brief time. Such was the rush to try out this new feature that it overwhelmed MMOS's servers with at one point receiving over 800 requests every 60 seconds!
[caption id="" align="aligncenter" width="1000"] 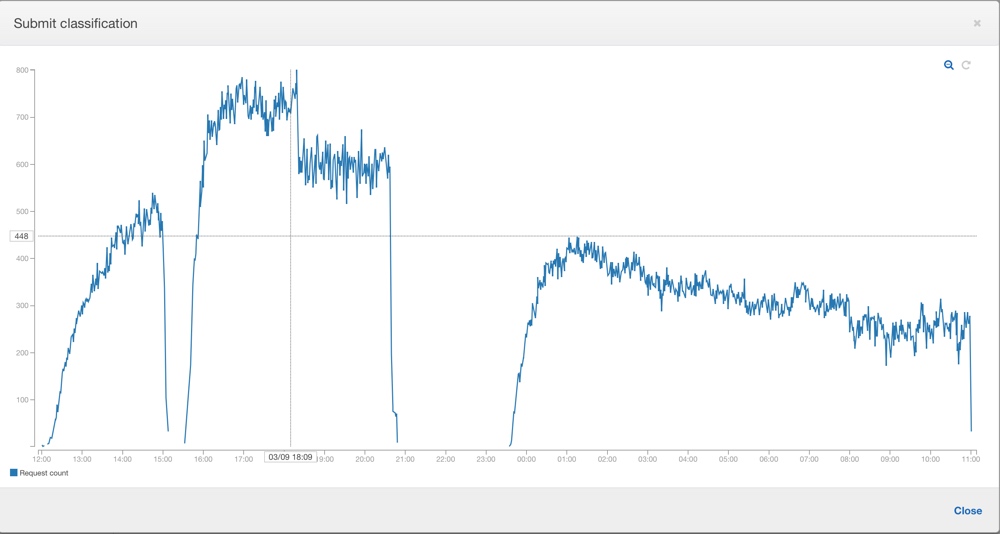 Submissions received by Project Discovery in its first 24 hours including the two times the server was closed due to demand.[/caption]

And a huge thank you goes out to all of you who gave it a try yesterday. The last day was about to keep the servers alive - as you guys really gave your best attempt to destroy them, raising PvP to a brand new level - MMOS servers vs. capsuleers. We suffered some losses, got even podded a couple of times - but we are back! We had some outages - we had to upgrade the DB and the storage - but finally we seem to be more or less stable.

The end result of this was over the first day 463.936 classifications were made which resulted in the completion of 14,500 tasks. But it didn't end there: In CCP Seagulls recent ">video update she explained that over 2 million classifications had been submitted - this averages out at over 200 classifications every 60 seconds. CCP Seagull also stated that the initial analysis were  that players were getting 'a good accuracy when compared to regular scientists'.
There are plenty of videos out and about about project discovery giving hints and tips on how to improve your accuracy ratings. Below is a video by Daegarn that I had personally used to to improve my own accuracy from a so-so 50% to over 70% in just a couple of days.

With the introduction of new ">facial augmentations and drifter boosters this mini game is definitely rewarding for those who are persistent as the rewards increase with every level you gain.
Have you tried Project Discovery yet? If so leave your comments below and tell us what you think!